The Garden of Earthly Delights began to take shape when Anna Rierola was a resident at the Institute for Research in Biomedicine (IRB Barcelona). There, she was able to talk with researchers from different departments about order and disorder in the field of molecular biology.

The Garden is presented as a super-organism, where there is freedom of action, continuous interaction between the elements that form it, together with cohabitation and mutual dependence on the different species.  All living organisims are constantly interwined between eachother still depending on the system as a whole.

The Sant Pau Modernist Complex declared a world heritage site by UNESCO was designed by Lluís Domènech and Montaner as a garden city for the sick. After serving for a century as a public hospital, its refurbished pavilions are today in all their splendor and will represent a very special setting for the first public presentation of this artwork, that will be the second exhibition of art and science in this venue, organized jointly by the Quo Artis Foundation, the Institute for Research in Biomedicine (IRB Barcelona), and the Sant Pau Modernist Campus. 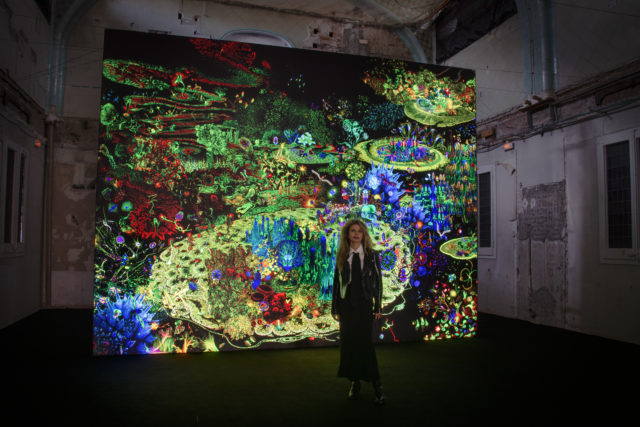 Inspired by the homonymous work of the painter El Bosco (Hieronymus Bosch), this large and colorful garden is composed of hundreds of images collected and provided by biomedical researchers studying under different microscopes life stages and episodes. The images in the piece represent the multiple levels of biological organization -organisms, cells, tissues, organs, and functions – and evidence the essence of biodynamics through networks of interconnection.

In this sense, The Garden of  Earthly Delights is a metaphor for life: presented as a connected phenomenon, a large stable ecosystem based on the interdependence of elements, and open and non-linear process. For this reason, the garden is represented as a whole connected, harmonious, and beautiful space where each element plays a role in a complex and self-organized system. 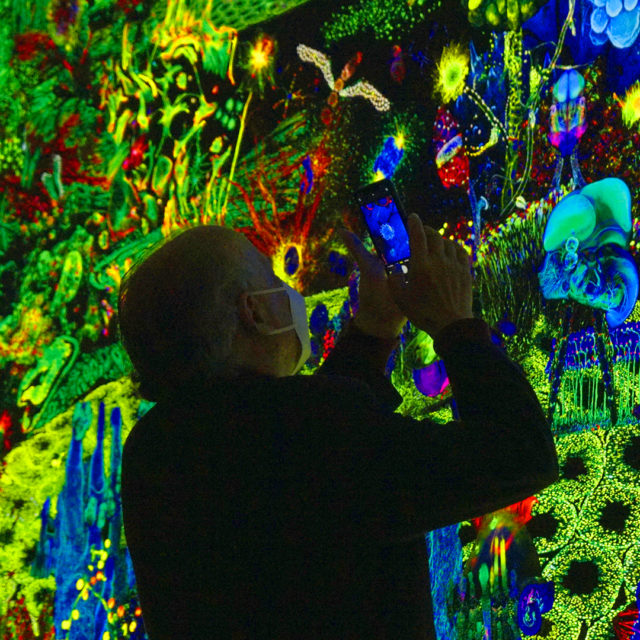 Through her work, Anna Rierola invites us to enter the mystery of life, to admire it, observe it, and reflect on it by appreciating the basic principles of biology. On another level, it also raises up the question of the maintenance and care of this huge garden, it forces us to ask ourselves how to live in it and protect it so that it can be inherited and enjoyed by future generations. In other words, this artwork helps us visualize a sustainable way of life within our societies that does not obstruct nature’s inherent capacity to sustain life.

The following videos exemplify the moving-image version of this artwork: